3.1 Know that the study of science is concerned with investigating and understanding the animate and inanimate world around them and that some processes or forces cannot be seen or heard but experienced through their observable effects on the behaviour of everyday objects

3.3 Be able to conduct scientific investigations

3.3 Be able to gather evidence from a variety of sources including first-hand observation and measurement and secondary sources, such as books, CD-ROMs and the Internet

3.4 Be able to discriminate between evidence and opinion

3.5 Understand the importance of obtaining and using evidence to test scientific ideas, opinions and predictions

3.6 Understand some of the effects of forces and the availability of energy in different forms on people’s everyday lives

3.46 Be able to construct circuits, including switches, bulbs, buzzers and cells, on the basis of drawings using conventional symbols

3.47 Be able to vary bulbs, wires, switches and cells in an electrical circuit to change its effect

3.48 Know about the nature and effect of gravitational force on everyday life situations

3.49 Be able to identify the effects of physical forces including gravity, friction, centrifugal, centripetal and magnetism in real situations

3.50 Understand how forces are measured in Newtons and to be able to measure them with a force meter

3.51 Be able to identify and record the direction and strength of forces using arrows of different lengths

3.52 Know that light travels in a straight line until it strikes an object

3.53 Know that light behaves differently when it interacts with different materials and that it can be reflected, refracted or absorbed and how these properties have been used in everyday situations such as road safety

3.54 Know that light travels through some materials and not through others and how we use these material properties in everyday situations

3.55 Know that we see things when light from them enters our eyes

3.56 Know how sounds are changed by altering the nature and frequency of vibrations

3.57 Know that vibrations from sound sources travel through a medium to reach the ear

3.58 Be able to identify the effects and uses of light and sound in everyday life situations

In this BrainPOP movie, Tim and Moby walk you through a concept that every student of physics needs to know. You’ll learn how to measure both negative and positive acceleration, with helpful formulas and equations presented in a way that’s easy to grasp.

In the movie, Tim and Moby will teach you about several kinds of structures, including Stonehenge and the Great Pyramids of Giza  in Egypt. You’ll learn all about how different types of buildings deal with the forces of gravity, compression, and tension to keep from falling down!

Tim and Moby teach the concept of buoyancy, the special property of fluids that acts against gravity. See how much water is displaced when an unsuspecting robot is dropped into a pool. Learn how an object's density determines whether it sinks, floats, or hovers in a fluid.

As Tim and Moby explain distance, rate, and time, you will learn what formula will help you to solve problems involving moving objects leaving from certain locations and at certain times — including how you can rewrite the formula to apply to your particular problem.

You’ll find out how the different kinds, ranging from lightning to electrical currents, are alike and different. Discover the three parts of an electrical circuit and how magnetic fields are created. Plus, find out about how a light bulb receives energy to light up and about the important role magnets play in creating electricity.

Tim & Moby explain the components of a circuit, including the power source, terminals, and switch. You’ll also learn what a current is, what a load is, and how batteries and wall outlets supply electricity to your house. Tim and Moby will also teach you why we use insulated copper wires to conduct electricity, and the difference between static electricity and the electrical currents in our homes.

From friction to magnetism, gravity to drag—forces always cause a push or a pull in a certain direction, at a specific magnitude. Adding up these vectors of force tells us if an object will move faster or slower, shift left or turn around, come to a complete stop or fly off into space! Tim and Moby also explain exactly how forces sometimes settle into a balance and how unbalanced forces can set things in motion.

In this BrainPOP movie, Tim and Moby will tell you all about Sir Isaac Newton's three famous laws of motion. You’ll see how braking on a highway, gliding down a snowy hill, and the swinging of kitchen doors illustrates Newton’s three physical laws. You’ll also discover related concepts like normal force, friction, and gravity.

Tim and Moby teach you all about the science behind the wheel and axle, one of the most important inventions of all time. Discover how these two devices work together as a simple rotating machine to decrease the amount of effort you need to move something from one place to another.

Learn how to draw circuit diagrams and investigate how adding or changing components in a circuit affects their performance.

Understand and investigate how we see and the relationship between light, objects and the formation of shadows.

Find out how sound is made, how it travels and how it can be changed. Musical instruments illustrate a range of ways to produce sounds and alter pitch and volume.

Fit the correct component that best suits the performance of the circuit. Compare and give reasons for variations in how components function, including the brightness of bulbs, the loudness of buzzers and the on/off position of switches

Fit the correct components into the circuit, using the circuit diagram as reference.

Fit the correct component that best suits the performance of the circuit.

Short Fuse – Circuits in the home

Understanding circuits and fuses in the home environment.

Let there be light

Show how light travels by using light diagrams to show how objects are seen and shadows are created.

Love to Know offers a great overview of the physics involved in roller coasters.

Amusement Park Physics gives a lot of information and explanations to the science and forces behind the different rides in an easy to understand language.

Puzzling Caret is an interactive game where the children can build their own roller coaster.

Kids Discovery has an interactive game where the children can build their own roller coaster.

The BBC schools website has information on the different areas covered through this unit including energy, forces, friction and electricity.

The School Physics website gives information of physics at both a basic and more in-depth level.

Resources suggested by teachers on Electricity.

Resources suggested by teacher on Forces and Motion.

Resources suggested by teachers on Light and Sound.

How to make an electrical probe

The Science of Amusement Parks

The Physics of Rollercoasters

Rollercoasters – The Physics Behind the Fun 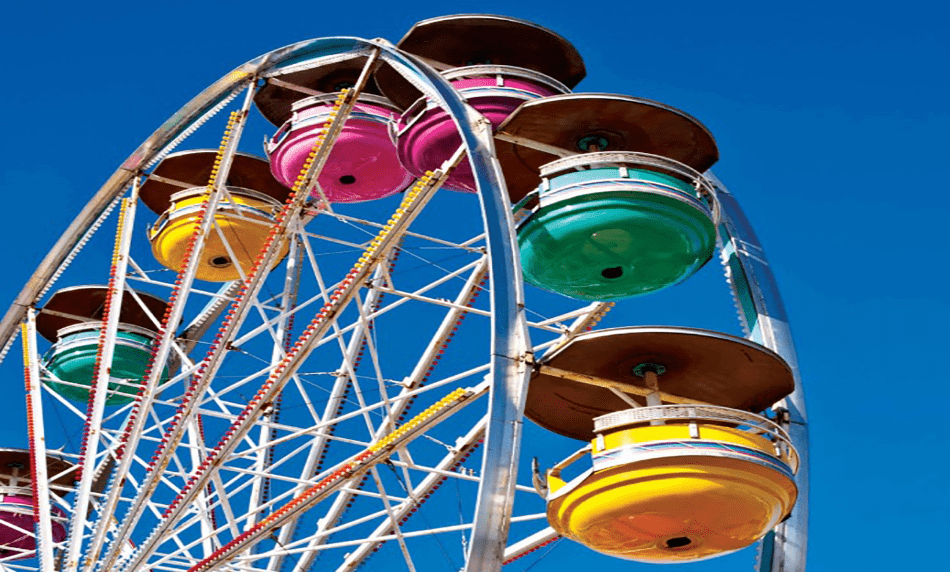